Drama: Debt Monologue: She Says, He Says - an Introduction 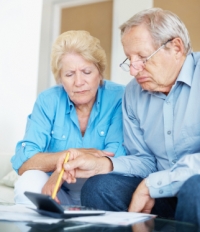 In this conflict, each person relates to money in a way that highlights their differing philosophies of life, and is symptomatic of the conflicts between them.

Robert, the husband, wants to remain free from a dependency on money. He has developed a philosophy of life that suits his psychological and spiritual needs, and does not believe that his happiness and well-being depend on money. In his monologue, we see that his relation to money has been influenced by his childhood. He transfers his rebellion against his mother to a rebellion against his wife Mary. He fights Mary's pressure to earn money in the same way he fought his mother's pressure to make him do whatever she wanted. At this stage in his life, the rebel part in Robert is succeeding: he is doing what he wants and expects Mary to accept him that way.

Mary needs to understand her husband's rebellion against her, and the transference of his emotions toward his mother to his wife. If she stops pressuring him on money matters, the situation could change and Robert might stop rebelling. He could start viewing the financial situation in the family in a more objective manner, free of unsolved emotions and conflicts from his past.

We see that Mary is also locked in a belief system that keeps their conflict alive and re-activates it repeatedly. She has her own personal problems with money, stemming from her childhood with a gambling father and his debts. For her, a gambling father was a catastrophe and the source of many fears and worries about the future. Having a husband who is an artist is essentially like a gambler: he gambles on his artistic talents, perhaps at the expense of his family. Mary expects Robert to resolve the money problems just as she expected her father to resolve them in her past. The problem is that she remains passive, only worrying and complaining; this passivity reinforces her husband's rebellion. As she says, "I know if I were alone, I'd budget, I'd make sacrifices." So why doesn't she start to do that right now, without waiting for salvation or understanding from Robert? Why doesn't she take responsibility and initiate her own change?

In the monologues, we also see the cultural effects on our perception of money. From a gender point of view, the husband in Western society is expected to earn money and support his family. Robert rebels against this value and chooses the artist's value: "I can't sell my soul to make money." Mary expects Robert to behave according to society's value labeling the man as the main provider. She places all the emphasis on her husband's potential to make money, without understanding that she can do something to make a change. She doesn't believe in her power as a woman to contribute to the financial improvement of the family.

Mary and Robert need to communicate clearly with each other what their values are regarding money. They must understand the strings of the past that are influencing their mutual expectations. With the help of individual and couple therapy, they can solve this particular problem without relinquishing an essential aspect of his/her world-view.

Read What He Says

Read What She Says