In-Law Conflicts Before and After The Wedding 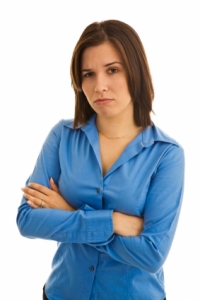 I am a 20 years old newlywed and mother. My marriage did not start on the best note. It started out with a pregnancy. His parents were understandably not very happy with the situation. They seemed to come around after our decision to marry, but soon things stared to go downhill.

His mother became very intrusive and manipulating. I let it go time after time, not wanting to make a scene. Finally after her walking in on my obgyn appointments (she is a nurse in my doctor's office) and catching her looking at my chart, not to mention asking a doctor there to induce me, I asked her to stop and asked my fianc? to mention to his mother that I was becoming a little uncomfortable. She denied everything to my now husband.

Things became worse and worse, with her screaming at me and calling me names for inviting his father to our wedding, not having his 13 year old step-sister in the wedding, their names not on the invitations. I explained that it was my fiance's choice about not inviting his father and his step-sister (she is a little young and I didn't ask my sister the same age); about the invitations, it is proper etiquette, my parents are sending them out and paying for them. But nothing satisfied her and she started calling the priest who was to marry us. She also called her son at work, hysterical after I asked her how she wanted to be seated with her second husband, so as not to make her uncomfortable at reception close to her ex-husband and his wife.

After this, she told me on the phone that my fiance was cheating on me, that I would get what I deserved, that he was like his father and that the apple doesn't fall far from the tree. She then threatened to ruin the wedding and our lives and tried very hard to do so. They sued us for the baby gifts given and money they gave to my husband for college. We wound up with a restraining order against her.

I love my husband very much and know that he loves me. I don't regret marrying him, but fear that he regrets marrying me. What do I say to him to make him feel better, or at least come to terms with why this happened? I feel the need to comfort him. It is close to our one-year anniversary and all these things are running through my mind.

Could I have handled it better? Maybe I could have done something to avoid him losing his family. I can't imagine what he is thinking.

Any advice from an objective point of view would be helpful.

First of all, my dear young mother, congratulations on your new baby. You seem so upset because of your problems with your mother-in-law that you don't even mention anything about being a new mother. This is an important and happy event and you deserve all my best wishes! I hope that you and your husband are able to enjoy the baby, although you have been through traumatic times.

You ask if you could have handled the situation better. I am not sure. It has been indeed a difficult situation, and I think that you have been courageous and have shown a lot of guts. Your situation was a terribly stressful one for any new bride, especially when she is 20 years old and pregnant. You deserve a medal, believe me.

Your husband took the risk to marry you, despite his mother, and it shows that he tries in his own way to free himself from her influence and control.

The truth is that nothing is your fault. I understand from your letter that your husband's family has serious problems. His mother seems to be a very unstable and immature person, who has unfinished business with herself, her ex-husband and her son. Her behavior is manipulative, intrusive, overpowering and expresses a complete loss of self-control. I believe that she has serious emotional problems, and I hope that she will look for professional help.

Your husband took the risk to marry you, despite his mother, and it shows that he tries in his own way to free himself from her influence and control. I am not sure this is enough, but it is a start. I suppose he suffers from what happened, but he knew about his family dynamics long before he met you. He didn't 'lose' his family, and certainly not because of you. I believe he and his mother will be in contact again. You don't 'lose' your mother or your family. You can be cut off emotionally, and even physically, but you don't 'lose' them.

What happened with your husband's family shows to what extremes this family is able to go, and that the problems are serious and even pathological.

Both of you need time to rest and heal, to comfort each other and enjoy the baby like any other young couple.

My suggestions to you are:

I believe that you will make it. You seem to have the strength to deal with this complex issue. As it is said: "You get the problems you are able to deal with."

More in this category: Early Toilet Training »
back to top