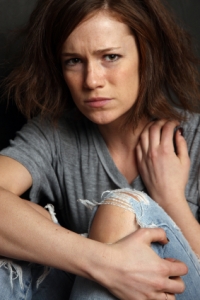 Bruce was really cute. I wanted him to ask me out, but every time I tried to talk to him, he ignored me. I was only 14 and he, after all, was in college.

Then one winter night I went to a party in the city and he was there! Maybe he would talk to me, ask me out on a date, be my friend. Maybe he would even fall in love with me and then, just like in the movies, take me in his arms and gently kiss me.

But as usual, he didn't even look my way, and when I tried to talk to him he walked away.

I smoked a lot of pot that night.

Listening to music I passed out on the floor, lying on my back. I woke up a few hours later, the room dark and quiet, with Bruce on top of me, pushing his penis inside me.

It hurt. He was heavy and smelled like beer.

The room was cold and I could hear other kids snoring on the couches. I was frozen, inside and out, outraged and shocked. I didn't fight. I didn't scream. I didn't even say "stop." Mostly, I just couldn't believe it was happening.

About three minutes later it was over. Those three minutes changed my life forever. I went from being trusting and naive to being angry and fearful, suspicious of all men.

Bruce got up without a word and went to sleep in another room. I couldn't sleep. I was numb, stunned. At daylight I went home. I didn't tell a soul what had happened.

The next time I saw Bruce he ignored me. I was angry but too ashamed to accuse him or tell our mutual friends.

Years later I learned that what happened had a name: .

Rapists seek power and control. They enjoy hurting and humiliating women. Often they have a willing sex partner at home, so sex isn't their motive - violence is. Small children and elderly ladies are raped; looking "sexy" does not cause an attack.

Rapists look for victims who are scared, weak or in some way vulnerable. Children from dysfunctional families and children of sex abuse survivors are particularly vulnerable to sexual assault.

In many cases, as with me, the victim doesn't fight back. Either she's scared of being hurt, or she doesn't know what to do, or she's simply in a state of shock.

Four years later I attended a rape survivors' support group and told my story. The counselors, themselves rape survivors, confirmed that what had happened to me was rape, even though I knew the attacker, even though it didn't happen in an alley.

Until then I blamed myself. Hadn't I tried to flirt with him? If I hadn't been high on pot maybe it wouldn't have happened. If I had yelled maybe he would have stopped.

Now I'm a karate and self-defense teacher. It's no accident I chose that profession. I started karate lessons "just for fun," but I think that inside I was screaming, "Don't let this happen to me again!"

When I teach, I tell rape survivors that it wasn't their fault, that they needed feel ashamed. Each victim does what she needs to survive. Here are some tips for avoiding rape:

*Scream! Scream "fire!" as loud as you can. (People will call 911, and they'll run in your direction. "Help" doesn't always bring a response.) This also gives you a 50% chance of getting away.

*Fight back! Take a karate or self-defense course to learn effective defense techniques. Just like learning CPR or first aid, self-defense is something everyone can learn.

*Trust your instincts! If a guy you're dating seems controlling and doesn't respect your independence, this is a warning sign. If something feels "weird" about a situation, it probably is.

*Stay together! Date in groups. Have a back-up plan to get home if something goes wrong.

In the event of an attack, tell someone. The minute I told my story I began to recover. I went on to get married and have children and lead a normal life, though I still don't feel safe sleeping on my back and I'm still very suspicious of men.

*Report the attack to the police. Even if you decide not press charges, it helps the police to know what happened. It may save another from being attacked.

Published in Rape and Sexual Abuse
More on Parenting
Tagged under

Sally Byrne is a former Tae Kwon Do state champion, writer, and mother of three.

More in this category: « Advice from Sara Coping with Sexual Abuse »
back to top