Drug Addiction: an Inside View 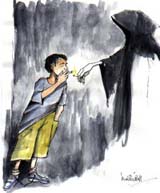 You've seen them - glassy eyes in sunken eye sockets, pale skin hanging off their bones. If you haven't already guessed, I'm talking about junkies. They messed up at some point in their lives by "experimenting" and got addicted. Now they want you to try some, too. See how it helped us? See how much better we are now? Come one, one hit won't hurt. One smoke won't get you hooked. One little dose won't kill you.

That's the biggest load of crap I've ever heard.

Drugs kill. You hear about it almost every day. Heroin overdoses, pot laced with some deadly meth, LSD overdoses causing people to think they are invincible, people dropping acid and then veering off the road because "snakes" were attacking them. You still think drugs seem like the way to go?

Every single drug out there is addictive.

My close friend Darren smokes pot every day. He's also dropped acid, shot up heroin, snorted coke, and done just about any other drug out there, even the designer drugs. He's very lucky that he's not dead. He's been in the hospital quite a few times. He almost OD'd not too long ago.

Darren used to be one of those people who say, "I won't get hooked. I'm too strong." Now he feels like he's going crazy if he goes without a smoke every few hours. Do you want to turn out like that? I didn't think so.

You never fully understand what drugs do to you unless you experience it firsthand. But that doesn't mean to go out and try some stuff just to get experienced. I have many friends who are addicted to various things. Unfortunately, I was too dumb to let that tell me not to try drugs.

I got myself addicted to inhalants and pot. I'm still struggling with both of those things. Hearing that is all it takes to prove to some people that drugs are the wrong way to go. Other people, it does take a personal experience for this to be driven home.

Every single drug out there is addictive. You may have to take it more than once, but you will get hooked. Pretty soon, you have to start taking larger doses to get the same high as your first time. Later on, you need to take huge doses just to stay normal, not to mention to get high. You end up investing hundreds -- more likely thousands -- of dollars to keep up with yourself. Eventually, you try other drugs to see if you can get a better high. Then, to make more money, you start dealing.

It's really amazing how many different people buy. Men in business suits, pregnant teens, ten-year-old runaways, old men and women looking for a last thrill of life. Does that sound like a good thing to get into? Would you feel good selling crack to a little boy with a tear-stained face and dried blood on his lip? Would you feel good seeing babies born as heroin-addicts, because you sold to their mothers while they were pregnant? Would you feel good if one day you were selling a person some very strong LSD, and your mother drove by and saw you? Would you feel good if you had to spend the rest of your life in rehab, rather than indulge in your old dreams of owning a law firm?

Just remember this one thing, if nothing else: No matter how hard it gets, no matter how bad it may seem, drugs will make it worse.

The Author was 15 when she wrote this article.

Published in Drugs and Alcohol
More on Parenting
Tagged under

More in this category: « Drama: Pressure to Drink
back to top