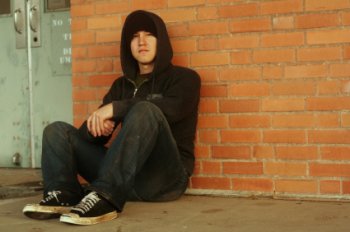 The Facts About Alcohol

Alcohol belongs to a class of drugs known as 'depressants' because they slow down parts of the brain, such as judgement, reaction time, and motor skills. It also slows down the nervous system, lowering the heart rate and slowing breathing respirations. Alcohol is a legal drug (for people 21 and over in the United States and 18 and over in parts of Australia and Canada) and is most commonly used. If taken in moderation alcohol does not harm most people. However, regular excessive drinking of alcohol can cause a variety of health, personal, and social problems. Alcohol passes straight into the bloodstream from the small intestine and stomach.

In the high school parking lot on Friday afternoon, after school, Seth faces a difficult dilemma. Makko: Are you going to the party at Trisha's tonight, dude? Makko puts his arm around him Seth's shoulders. Seth: I guess. Makko: My man, it's B.Y.O.S. You've got some, right? Seth: I don't really have... Makko: A stash...I can fix that. You want me to hook you up, dude? Seth: No, it's okay.

Marijuana is the most commonly used illicit drug in the U.S. Studies have shown that the number of teenagers who have reported using marijuana nearly doubled from 1991 to 1997. By 1997, 50% of high school seniors reported having used marijuana and 88% reported that marijuana was either "fairly easy" or "very easy" to obtain.
Read More

Reader Response: Why I Hate Drugs

I guess I'm really writing this so maybe other people will read my story and not make the same mistakes. I have. I am a 16 year old sophomore and until about a year ago I was very smart and had a lot of friends. One day I was a normal teen with a normal family and the next my world was being torn apart. My family started having a lot of problems I feared my parents getting a divorce and I was living with a suicidal sister. I started spending less and less time at home and more time with the people that I called my friends. They all were into drugs and the stealing and violence that goes with them.

The Facts About Drugs

COCAINE and CRACK Cocaine belongs to a class of drugs known as stimulants, which tend to give a temporary illusion of limitless power and energy that leaves the user feeling depressed, edgy, and wanting more. Cocaine is usually snorted through the nose but it can also be injected intravenously. Crack is a form of cocaine that has been chemically altered (freebased) so that it can be smoked. Physical Risks Associated with using any amount of Cocaine/Crack: * Increases heart rate, blood pressure, breathing rate, and body temperature. * Heart attacks, Strokes, and Respiratory Failure * Brain Seizures * Reduction of the body's ability to resist and combat infections * If using shared needles, hepatitis and/or AIDS Psychological Risks * Violent, erratic, or paranoid behavior * Hallucinations and "Coke Bugs", which is a sensation of insects crawling on or under the skin * Confusion, anxiety, and depression * Losing touch with reality (commonly reffered to as "Cocaine Psychosis") You can die from Cocaine the very first time you use it, due to the rapid effects it has on your heart and nervous system.

Last week, I ran into one of my teenage nieces at a trance party. I was just there out of curiosity -- really. "You are the coolest aunt, " she told me. She has a point. I've lived on a commune, hitchhiked across Europe, marched in demonstrations, have an open mind and love to experience new things. It was that love of new things that led me to my first experience with pot, back in the '60's. I was 18 and in my first year of college. My friend, Bill, and I went to his apartment to pick up the rest of our crowd, and a bunch of people were sitting around the table smoking a joint.

Wyatt on Being Cool: on Smoking

We all know that smoking is bad for us (Duh!). I mean the label on any cigarette package practically says "Smoking this product will kill you". But the question is not "Is smoking dangerous?" but "Is smoking cool?" OK, so you agree that killing yourself is very uncool, but some of us still think that it LOOKS cool to smoke.Now, in my other articles (YOU HAVE READ MY OTHER ARTICLES?) we figured that looking cool is different than being cool. Well, since BEING cool is what we're after here, I'm now gonna tell you why you can't smoke and be cool at the same time.

Quitting for The 39th Time

I just quit smoking. I remember the day I started so clearly, though it was 18 years ago (aaagh!). Kay Turner, the coolest girl at Youth Club was making friends with me, I felt so honored, and when she offered me that first cigarette (Consulate, Menthol - yuk!) - there was no way I was going to turn her down. So that's my sad reason for starting a life long habit - to look cool. I remember how I must have looked, getting through packets of them when I never really needed to. How I have wished over recent years (especially since my mother died from cancer) that I had never got hooked, like some lucky people.

The Facts About Smoking

Nicotine is the stimulant found in all tobacco products such as: cigarettes, pipe tobacco, chewing tobacco, and cigars. Cigarettes contain at least 43 distinct cancer-causing chemicals. Smoking is directly responsible for 87 percent of lung cancer cases and causes most cases of emphysema and chronic bronchitis. Smoking is also a major factor in coronary heart disease and stroke; and has been linked to a variety of other conditions and disorders, including slowed healing of wounds, infertility, and peptic ulcer disease.

Q: A few days ago, I caught my dad doing drugs. He said that if I told my mother he would divorce her. I can't help but worry it will slip out... I cant sleep ever !! A: You are so brave to be asking about this, and I understand how this could make you really stressed out. This is a big burden to be carrying around! And you shouldn't have to. Your father's behavior is typical of drug users - - blaming, hiding and denying. It might be hard for you to start dealing with this because to do so you will have to be thinking of your dad in terms of being a user - both of substances and of people - and that is a painful and uncomfortable realization about your own dad.

Living with an Alcoholic Dad

During a commercial break, a public service announcement flashed across the TV screen: "Twenty questions to determine if you are an alcoholic." A minute later I rushed out to the porch where my dad was sitting with a can of beer. "Daddy! You're an alcoholic! You do seven out of the twenty things, and you only need three to pass!" I was twelve years old. My father looked at me and said, "Do we live in a nice house?" We did. "Do I go to work every day?" He did. "Am I a lawyer?" He was. That was that. Alcoholics live in cardboard boxes and beg for a living. The TV must be wrong. Every night at 5pm, Dad would come home, tense from his day at work.

Living with an Alcoholic Dad

During a commercial break, a public service announcement flashed across the TV screen: "Twenty questions to determine if you are an alcoholic." A minute later I rushed out to the porch where my dad was sitting with a can of beer. "Daddy! You're an alcoholic! You do seven out of the twenty things, and you only need three to pass!" I was twelve years old. My father looked at me and said, "Do we live in a nice house?" We did. "Do I go to work every day?" He did. "Am I a lawyer?" He was. That was that. Alcoholics live in cardboard boxes and beg for a living. The TV must be wrong. Every night at 5pm, Dad would come home, tense from his day at work.

Q: Dear Dr. Sylvia, I am a single parent of three teenagers; a senior girl, age eighteen, a sophomore boy, age sixteen, and a freshman girl, age fourteen. My family is in crisis. I've raised these children alone since they were one, three, and five, and now my son is involved with drugs, alcohol, and is on probation. He was busted two weekends ago for MIP, driving under the influence of pot, possession of pot, and possession of paraphernalia. I couldn't believe it.

Do Behavior Changes Point to Drugs?

Q:Our 16-year-old son has been acting strange lately. He stays in his room a lot, keeps to himself and seems very secretive. Could he be getting into drugs? Guest Expert Hilorie Baer, MSW, answers: Mood swings and changes in attitude and behavior are often seen in teenagers and may simply be signs of normal adolescent angst. However, if they are extreme or are affecting the child's functioning, they could be signs of drug abuse or some other serious problem and should not be ignored.

Dr. Tobin Talks to Parents About Drugs: Part I

BACKGROUND Before we talk about the specifics of teenage drug use let me first mention the obvious. General drug use and/or abuse are an accepted part of our society. Hardly anyone questions the basic assumption that you take drugs to reduce tension, to lose weight, to concentrate, to get rid of a headache, to feel sociable, to sleep better, to kill a cold, etc., etc., etc.... Drugs temporarily hide those nasty annoyances that accompany life at the end of the Twentieth Century.

Q I have a 15-year-old son who smokes. Not much but it's only the start. We don't know how to make him understand the situation. His two grandfathers and one grandmother died from heavy smoking and he knows it. We (parents) were also smokers in the past but not now and he doesn't get it. Please help us. - Marcia A I hope some of these ideas will help you. It is not easy to explain the concept of mortality to a teenager.

Mike and Jim are on their way into the liquor store. Their plans for the night include drinking...and drinking. "Mike, come on, man! I'm not doing this by myself." "Chill, I'm coming." I can't stand this part of it. Buying the booze with our fake ID. I don't know why the other guys can't get themselves some fake ID. Jim and I use ours all the time. We could get into some serious trouble if we got caught. "Four six-packs of Budweiser please and that whiskey over there.

Drug Addiction: an Inside View

You've seen them - glassy eyes in sunken eye sockets, pale skin hanging off their bones. If you haven't already guessed, I'm talking about junkies. They messed up at some point in their lives by "experimenting" and got addicted. Now they want you to try some, too. See how it helped us? See how much better we are now? Come one, one hit won't hurt. One smoke won't get you hooked. One little dose won't kill you.