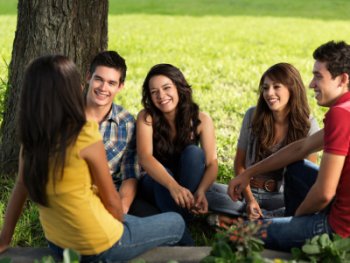 Q Last night, when my husband and I finished making love, we noticed that our six-year-old son was asleep at the foot of our bed. He must have come in while we were making love and fallen asleep. We didn't hear a thing. Was he traumatized? Should we say anything to him? Guest Therapist Elanah Wernik, MSW, answers: A: Your son most probably saw you making love but he obviously felt comfortable enough to fall right back asleep. Most of us have had the experience of waking our children (who have fallen asleep in front of the TV or in our beds) and getting them back to their rooms, speaking with them, giving them a kiss goodnight-- and the next morning the kids don't remember a thing.

Dear WholeFamily Counselor, In my neighborhood pool, mothers often bring their four- and five-year-old sons into the women's changing room. This seems to me not to be in the best interests of the child. In fact, I think it's a subtle form of sexual abuse. I'm sure we wouldn't bring our five-year-old daughters into the men's locker room. At what age should parents stop bringing their children into a dressing room of the opposite sex?

Explaining The Facts Of Life to a Five-Year-Old

We're expecting our second child soon. How can we best respond to our five-year-old's questions about how the baby got there, inside me!? Guest Expert, Lisa Kainan, MA, answers: When parents explain sex and birth to their children, they should take into account the child's level of understanding and allow the child's own curiosity to be a guide as to how much detail to give. The most accessible explanation will be one that is just one level above the child's current level of understanding. This level can easily be determined by directly asking the child some simple questions about where babies come from. Children can easily sense a parent's embarrassment or anxiety concerning this subject.

Parents sometimes are concerned about possible sexual interaction between their children of different ages. This concern was illustrated in a question I received from a mother of three. She asked: "I found my three-year-old daughter in a room with my seven-year-old son and five-year-old daughter. It was very quiet in the room, and that's very unlike them. I don't know what they were doing, but I sensed a lot of curiosity. It seemed to be secret. My caregiver also says there seem to be a lot of physical games going on. They want to hug and kiss and after watching The Lion King, they lick each other. My sense is these activities are different from plain affection.

Exclusive to Wholefamily....Dear Dr. Sylvia, My 11-year-old daughter has hit puberty and all that comes with it. She acts as if she's 20 in some areas of her life and in others, she acts like a five-year-old. How do I let her know that the way she wants to act is not appropriate for her age, and the way she should act is not like a five- or 20-year-old? A At least from your description, your daughter is acting very normal for an early adolescent. The babyish behavior is telling you that she's not sure she's ready to grow up. She still requires the assurance that you're there for her. If the behavior is too childish, like temper tantrums when she doesn't get her way, you can ignore it and discuss the issue at a calmer time.

Last night, when my husband and I finished making love, we noticed that our six-year-old son was asleep at the foot of our bed. He must have come in while we were making love and fallen asleep. We didn't hear a thing. Was he traumatized? Should we say anything to him? Guest Therapist Elanah Wernik, MSW, answers: A: Your son most probably saw you making love but he obviously felt comfortable enough to fall right back asleep. Most of us have had the experience of waking our children (who have fallen asleep in front of the TV or in our beds) and getting them back to their rooms, speaking with them, giving them a kiss goodnight-- and the next morning the kids don't remember a thing.

Is Eleven Too Young for Boyfriends?

Hi, my daughter is 11 years old and very popular. She has developed and started her period. I feel that I'm being over protective. I get nervous when she's alone with a boy. She prefers hanging around with just boys. Sometimes there are three or four around. They are all good kids and very polite and come from good homes, but is there something I need to tell her or be doing? I don't want her to get a reputation. She is a very good girl and we do have open communication. Isn't 11 a little too young to have "BOYFRIENDS?" A It is natural to feel uncomfortable when our children take a big jump that we aren't necessarily ready for. You say that your daughter is 11, but well developed physically and perhaps emotionally.

Dear WholeMom, My daughter is almost 17. I was cleaning her room and found a used pregnancy testing "stick". It was wrapped in a paper towel in a little used cabinet in her room. The upsetting thing about this is that this is a child who excels in school, will likely get a full scholarship to the school of her choice and never leaves the house without telling me she loves me. I have always talked to my children about sex, consequences as it relates to health, pregnancy and the sometimes emotional turmoil that early intimate relations can result in. My question is - do I tell her I found this - let it go - or what. She was away from home during Christmas and granted, I cleaned her room and closets and cabinets - this is her personal space - and I respect this - I did not expect to find this.

Our 14-year-old seems obsessed with sex. He spent a lot of time looking at sexual positions on the Internet until we forbade it. Now he does it at a friend's house. One day, he left his diary lying around open and I saw pages of crude, primitive descriptions of sex. Is this something to worry about? Is it normal behavior for this age? A Alan J. Flashman, MD, answers: Yes. However, the "fact" that it is normal is of little use to you. Let's try a few supplementary questions: Should I let him know that I am aware of his interests? I think so. Should I leave his sexual interest alone as his "private" business? After you talk with him, sure.

Dear WholeFamily Counselor, I have a 15-year-old daughter who seems to rather enjoy the company of older men.... some as much as seven years older. I believe this age gap at this young age is not acceptable. However, she feels she can have friends of any age. I don't think this is only a FRIEND! How can I convince her it is not a good idea and that the consequences could be devastating? She believes her older friends are totally harmless and would never do anything to hurt her, use or abuse her. I have explained how older MEN have been around and are quite capable of manipulating a young girl who has not been around, how they know just what to say to get what ever they want.

Monologue: How Far Should I Go?

Chris, 14, has a boyfriend, Rick, who wants to have sex with her. She doesn't think she wants to, but she's afraid she'll lose him. Rick keeps pushing me. I don't know if he's telling the truth - that they're all doing it... I mean, it's not exactly the kind of thing I can ask my friends in school, is it? Not even Dara. We're close, but not that close. I don't really want to, but he keeps saying if I love him, I should prove it. I'm happy with the way things are now. It feels good just to fool around and touch each other, and I like the kissing. Not so much when he tries to put his tongue in my mouth, that's kind of pushy. But I feel safe just having him hold me. I even let him put his hands under my blouse.

How Far Should I Go? - Therapist's Open Letter to Chris

Chris, you're facing a real tough choice and I suggest you find someone who is understanding and wise; someone who can be both patient and helpful. Food for Thought Before You Go There "OK. So there you are. In a relationship. Maybe you are in love. You are definitely high on hormones, in a constant state of arousal. You feel the adrenaline pumping, your throat is dry. You don't need to eat or sleep. All you need is LUV, right?" You're dealing with heavy-duty stuff and you need to talk. And soon!! If there's a chance that your parents can be that "someone", then talk to them. Your parents may very well be the people who care most about you in this world.