Written by  Sylvia B. Rimm, PhD
Rate this item
(0 votes)

While visiting my 29-year-old son recently, I realized that he may have ADD. He still has difficulty paying attention when someone is talking, his eyes drift around the room, and he often interrupts the person who is speaking, asking questions completely off the subject. When he was in kindergarten, his teacher told me that he daydreamed and didn't pay attention in class. His second-grade teacher told me I should get my son drum lessons or tap dancing classes because he couldn't sit still. All throughout his growing years, he watched a lot of TV, played with his Star Wars toys, and had difficulty making friends. He was the kid who was "different," and boys were always challenging him to fist fights or playing practical jokes on him. I checked a web site about ADD in adults and realized my son has some of the signs.

Is there a self-test someone can do to determine if a person has ADD, or must they be evaluated by a doctor? He is in the military, and has a promising future in computer graphics. I know he still has trouble making friends and prefers to be alone, and he has difficulty completing a project at work in a timely fashion. He is an adult, but since I never realized that he might have an attention problem until now, I would like to help him have a productive future. I mentioned the topic to him, and he was shocked and hurt that I suggested he had a "problem." Do you have any suggestions?

A: Dear Mother of Distracted Son,

The symptoms you've described could be characteristic of Attention Deficit-Hyperactivity Disorder or could be symptoms of other problems as well. Because your son is an adult, suggesting a potential problem is about as far as you should probably go. If he is performing successfully in the military, you should know that medication for ADHD typically disqualifies people from enlisting in the military. I am not sure how that would affect someone who is already enlisted.

Many people have a few ADHD-like characteristics, but a true diagnosis involves having many of the characteristics including difficulty with concentration, inattentiveness, impulsiveness, etc. Also consider that many young people have difficulty making friends and would benefit by learning some social skills. Not all of them have ADHD.

If your son is having difficulty adjusting, perhaps it will now occur to him to go to a psychologist in the military for some help in understanding his problems. If he is achieving successfully, it is also possible that with maturity, he'll work out his problems and build new self-confidence. Believe in him, and encourage him to get help if he feels he needs it.

The characteristics of ADHD are listed in my newsletter on the topic, and is available free of charge. Send a self-addressed, stamped envelope to:

Published in Learning Disabilities and ADD
More on Parenting
Tagged under 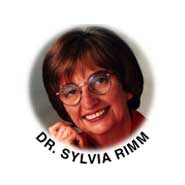 More in this category: « Six-Year-Old Has Language Processing Disorder
back to top