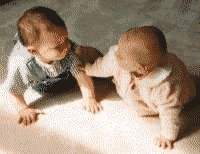 It's a winter morning and the members of my mother's group and I are drinking coffee and tossing around ideas for getting more sleep. Our babies, all around six-months-old, are lying on a big quilt on the living room floor, gurgling and shaking rattles. I see my daughter, Ilana, gaze at Beth's son, Matthew, the one baby in the group whom she has "known" since birth. Ilana drops her rattle and starts kicking her legs, squealing with excitement. Matthew returns the look and chortles. That afternoon, I write in the book I keep for Ilana: "She seems to have a thing for Matthew - and I think it's mutual."

Abby and Nancy, who met in a childbirth preparation class, jokingly call their kids, Leah and Elliot, "Lamaze siblings." For two years, Abby and Nancy spent many afternoons together with their babies, and the families would often get together on weekends. At two-and-a-half, Elliot and Leah are best friends. They speak to each other on real and toy telephones, greet each other with hugs, and ask to play together every chance they get.

But read about babies and toddlers in any classic child-rearing book, and you'll read that while they may enjoy being around their peers, they do not form friendships until much later. Jean Piaget, the grandfather of child development research, determined that preschoolers were egocentric and subsequent thinking about their relationships flowed from that assumption. Until recently, experts believed that five was the minimum age for making friends.

Recent research, however, has shown that babies as young as nine months can and do form emotional attachments to one another. (And my own "research" at home shows it's even younger than that.) In order for this to happen though, the children need to come into frequent, sustained contact with one another.

Clinical and developmental psychologist Edward Mueller's landmark 1975 study on toddler interactions paved the way for psychologists' changed thinking about early friendships. He became interested in the subject after watching his son, Loren, form a strong attachment to Robert, the son of family friends.

"Robert's mother is Danish, and the Danes have long believed that young children are capable of friendship," Mueller says. "She suggested getting the kids together regularly when Loren was eight-months-old and Robert was six-months. Christmas break came about six months later, and the kids didn't see each other for a couple of weeks. When they met again, they played a greeting game showing their joy at being back together. Robert walked in the door, and, gesturing to Loren, said, 'Da!' and laughed. Loren laughed back. Robert gestured, said, 'Da!' and laughed again and Loren laughed back again, sustaining the game. This went on for about 17 rounds.

"We realized then that this was more than a peer relationship," says Mueller. "It was a true friendship.

"We were amazed because it went against everything the textbooks said."

TRICKLE DOWN FROM MOM

Early friendships often develop between children whose mothers are friends and who get together regularly with their kids. Whether they realize it or not, mothers who are friends seem to encourage their young children to become friends. I remember wanting Ilana and Matthew to be friends in part because I knew their developing friendship would cement the growing bond between his mother, Beth, and me. Elliot's mother, Nancy, says, "I probably encouraged his friendship with Leah by the way I talked about getting together. It was such a treat for me to see Abby."

Especially at the age of two, friendships can take some of the pressure off parents. Only another two-year-old can enjoy running around the dining room table, laughing 25 times, and then want to do it again. Only another toddler will be happy jumping off that first step and then scrambling back up umpteen times with your little one.

Joan, whose daughter Rebecca became best buddies with Sheila's son Jon when the two moms met at a mothers' center and became friends, sees how important Jon's friendship has been to Rebecca. "It's important to feel you're very special to someone outside your family. It makes you feel safe. It makes you feel loved," she says.

HOW TO FOSTER EARLY FRIENDSHIPS

WHAT IS A FRIEND?
THE REAL EXPERTS SPEAK

Hannah, three: "It's someone that's not you. It's a different person."

Ilana, five: "It's somebody you play with."

Leah, three-and -a -half: "A friend is someone who loves you."

Published in Friendships
More on Parenting

Since the birth of her first child, writing about children has been Ruth's hobby, passion and profession. An award-winning journalist, she has published in Parents Magazine, Family Circle, Woman's Day and many other national and local publications. She has worked as a child-care worker, newspaper reporter, 60's activist and farmer. Ruth is married plus three, and is a certified parent educator and infant massage instructor. during the year 1999-2000 she was the director of the WholeFamily Parent Center.

More in this category: My Child Has No Friends »
back to top