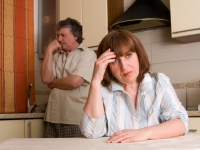 I have been married to my present husband for five years. It is the second marriage for both of us. Both of our spouses from previous marriages were having affairs. I have two children from my first marriage and my husband has four children from his previous marriage. Our marriage started out great and we got along perfectly. Recently, we have started growing apart. My husband drinks a lot, he tends to get violent when he drinks. He is verbally abusive to me and my kids. He will leave for days at a time. He will return and promise to never do it again. But he always does. He can be a real jerk to my children and impose all kinds of rules on them. But when his l2 year old daughter comes to visit none of those rules apply to her. This has caused great resentment from me and my children. When I try to talk to him about this, he calls my children names and me names. I do love this man, he does have a lot of good in him, but I rarely see it any more. Do you think counseling will help this marriage, or, what can I do to make him realize the hurt and anger I feel inside? He never seems to listen to me.

When two people enter into a second marriage they usually feel that this time it will be better than the first time around. They're older, wiser, more realistic, less na?ve, (Shimon note accent) and so forth. The truth is that expectations are even higher the second time around. Therefore when problems begin to surface the feelings of hurt, anger and disappointment are also greater.

You say that for each of you the first marriage ended because of an affair. Is that the only reason that you got divorced or were there other problems? Sometimes an affair is cited as the reason for the divorce but it's really only a symptom of more problematic issues. Was his drinking one of the factors behind his divorce? If possible, it would useful for you to talk with his ex-wife. Was he also abusive towards her?

What do you mean by "he gets violent"? Has he ever hit you or the children? Threatened you? Thrown things? Broken things? Have you ever wanted to call the police? You must take this very seriously. Abusive situations are marked by an escalating pattern of destructive behavior. Don't say to yourself, "but this only happens when he is drinking." It sounds like his drinking is increasing. Where does he go when he disappears for days? Is he having blackouts? Has money been missing from your joint bank accounts? Does he go to work those days? Could he be involved with drugs, gambling or an affair?

Abusers are often remorseful when they sober up and make promises that it will never happen again. But unless he backs this up with a call to a therapist or Alcoholic's Anonymous, then he is not going to change. There's an old joke that contains more than a grain of truth. It asks, "How can you tell when an addict is lying to you? Their lips are moving."

Ideally, it would be best if you could get some couple's counseling but your husband also needs to confront his own problems by himself. You should find yourself a therapist to help you address your issues and to improve your feelings of self-worth. You do not deserve to be treated this way. Your therapist will work with you on setting boundaries for him. Your husband needs to know that his drinking, his abuse, and his absences will no longer be tolerated.

You need to do this for yourself and for the sake of your children. This is not a healthy example of a marriage. Would you want to see your children in similar situations? Of course not, so respect yourself for the person that you are. It might also be helpful for you to seek out a group called Al-Anon. This organization helps the family members of alcoholics. Call your local chapter of AA to see if there is a meeting in your area.

On a secondary level, you mention the conflict with his children because they don't abide by the same rules as your children. This is a common problem in stepfamilies. The good news is that it is fixable. The bad news is that it requires the stepparent and biological parent to hammer out a set of rules and present a united front to the children.

At present you and your husband have bigger problems to deal with but you should still discuss this with your therapist and get some guidance on how to deal with his children and how to get him to be less demanding of your children. Down the road your husband may be able to hear you and back you up on this but for the time being he sounds immersed in his own problems. Take care of the bigger issues first.

Published in Marital Questions and Answers
More on Marriage

Louise Klein was born on the West Coast of Canada but lived for many years in Los Angeles and Philadelphia. She has a doctorate in clinical psychology from Widener University in Pennsylvania. Dr. Louise Klein is an experienced therapist in insight-oriented talk therapy. She has worked with individuals, couples and groups for many years. Her experience with families includes stepfamilies, adoptive families, nuclear families and families dealing with illness or death. Dr Klein is also trained in thought field therapy and regression therapy and has taught and worked internationally. Louise Klein lives in a rural community with her husband and St. Bernard and has a stepdaughter in college in New England.

More in this category: « Alone and Unhappy In Second Marriage
back to top