In the drama, "Disciplining Grandchildren", Violet criticizes her daughter Arlene because of the way Bobby behaved during the party. Arlene defends herself and criticizes Violet. Arlene feels hurt and angry. They distance from one another. 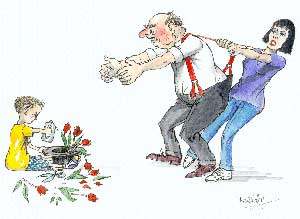 The mother--daughter interaction in the above scene is familiar to many of us. Violet and Arlene have very different ideas about what is acceptable for a mother to say to her adult daughter.

From Violet's point of view, she has wisdom, which she would like to impart and values she wishes Arlene would teach Bobby. She feels she has the right, if not the obligation, to express herself openly.

From Arlene's point of view, she and her husband are creating a new family, which should be quite separate from her parents. They want little input from parents.

Yes, but not easily. Violet and Arlene's power struggle is based on unfinished business. Bobby is the latest arena in a long-term struggle. In order to change the pattern, either Violet or Arlene would have to change.

First of all, Violet will have to decide that a good relationship with her daughter is more important than being right.

I would like to focus on Violet, the senior member, and her potential for changing.

It would be helpful if Violet understood that we can't change someone else; we can only change ourselves.

Working at accepting this, Violet could decide to try and focus on Arlene's positive qualities, perhaps, her warm relationship with Bobby, and try to ignore what she sees as her weaknesses. She could give her genuine compliments and withhold her criticism. Violet could begin to think about the fact that there are different ways of viewing most things, including the way a parent disciplines a child.

In relation to disciplining, it is true that children must develop a sense of what's right and wrong. They should be able to control themselves. But Arlene might not feel that this control should extend as far as throwing wrapping paper on the floor, or saying thank-you.

Violet can also find reassurance in the fact that, as time goes on, Arlene will receive feedback regarding Bobby's behavior and his manners from other contexts, such as his school.

She might be stressing other issues of right and wrong.

Hopefully, Violet will shift from the position of all-knowing critic to a more humble stance of a parent who had dilemmas, and like all mothers did the best she could. Optimally, Violet could internalize this stance well enough to get to the point of talking with Arlene one day, and allowing her to voice her complaints about the mothering she received.

Violet could listen as openly as possible without being defensive, and acknowledge that she, like all mothers, made mistakes, but that her intentions were to be the best mother she could be. This might help Arlene to be less defensive herself, and more open to Violet's suggestions about childrearing.

Fran Ackerman received her MSW from Simmons School of Social Work in Boston. She did postgraduate training in family therapy at the Ackerman Institute, Georgetown Family Center and at the Philadelphia Child Guidance Clinic. Her major interest is Bowen Family Systems Theory. She is currently on the faculty of the Hebrew University School of Social Work and has been on the faculty of the Ackerman Institute and the Philadelphia Child Guidance Clinic.

More in this category: « Grandchildren Give Tips to Grandparents About Travelling to Europe Vacationing with Grandchildren »
back to top