First Date and a Half: The Intrusive Sister

It is the morning after the famous first date. Trisha is lying in bed reflecting on the previous evening. For her it was quite an experience. She was pleased by the way James had handled the situation with her niece even though she is far from sure that she wants to expose James to her sister. She remembers her sister's caustic criticism of her ex and her biting sarcasm. Fay was not the prettiest or the most intelligent of the sisters but she made up for it by getting everything she wanted, mainly through bullying and manipulation. Fay wore her successful marriage like a medal and made sure to flash it at Trisha on every occasion. Trisha knew that there had to be something soft and loving somewhere in Fay's personality but years of trying to find it had proved useless and Trisha by now was immune to her barbs and taunts. This was the first time in years that Fay had managed to touch a nerve, and if the past was anything to go on, she would make the most of it. If anything could be calculated to drive James away, an evening at her sister's would be first in line. In the midst of her thoughts the phone rings. Trisha glances at her watch. It is 8:30. 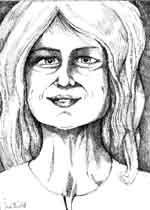 Fay: Hi, Juliet, so who's your Romeo?

Trish: And good morning to you too, Fay.

Fay: Celia told me that he is nice and good-looking -- or he might have been around the time Truman was president.

Trish: Look, Fay, I really don't need this, particularly at this time of the morning. Could you please give me a civilized reason for this call, because if it's just to bug me, you can buzz off now.

Fay: Keep your shirt on, darling. I just wanted to confirm next Sunday's dinner. I do hope that you aren't going to get cold feet - as you usually do.

Trisha feels her temper rising but she is determined not to let it show. She answers a tad too politely.

Trish: I would be thrilled to accept your invitation, Fay, but I will have to ask James first.

Fay: Of course, dear, you do that - If he calls again.

Fay rings off but not before Trisha hears her sarcastic chuckle.

Fays falls back on her pillow and feels tension gripping her throat. Why do things that could be so simple always get to be screwed up? What motive, other than sheer spitefulness, could her sister Fay have to push her nose into her affairs? Well, perhaps affairs is not the right word -- at least not at this stage.

Trisha gets up and goes to the kitchen. She potters around making coffee and toast. The phone rings again. Ok, Fay, this time you're really going to get it.
Trish picks up the phone.

Trish: Who is this?

Celia: Oh Auntie Trish, it's me. I'm so sorry. The last thing I wanted to do was to spoil things for you. I'm really an idiot. I behaved just like my mother and I was mean. I should never have called her and I should never have gotten you invited next Sunday. Please forgive me.

Trish: Oh Celia, It's OK. These things happen. I know that you meant well but next time try and put yourself in my place and perhaps you won't be so impulsive. I'm not a circus act, Celia, and what I do in my life is not to be paraded before an audience. Particularly not an audience that would like to see me devoured by wild beasts. OK?

Celia: I suppose you won't be coming to dinner.

Trisha: As I told your mother, Celia, it doesn't just depend on me. There is, as you might remember, someone else involved. I'll let you all know in good time.

Trisha's day passes without any more drama and it is only after dinner that her phone rings. This time it is James. 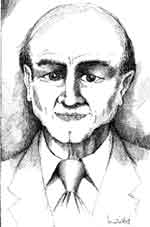 James: Good evening, Trisha, How are you?

Trisha: OK, James, and you?

James: I'm fine. I wanted to thank you for a really nice first date. I know it was a bit melodramatic at times but all in all I felt really good and I wanted you to know that.

Trisha decides to try and take the middle road.

Trish: Listen James, my sister called me first thing this morning to ask if we are really going to come to dinner at her house next Sunday. I told her that it was OK with me - which on second thought perhaps I should not have done - but that I would obviously have to ask you first. I don't know what to do. Even if you agree I'm not sure I want to go.

James: I have an idea. Lets have a "First date and a half" and meet for coffee tomorrow and talk it through. Whatever you decide is all right with me. Just one condition though. No coffee shop with relatives or friends OK?

James: Do you know the mall off 2nd & Vine? There is a cafe called "Spooning" next to the roof garden. I'll see you there at four tomorrow afternoon.

Part IV: The Third Date: To Meet the Family or Not?

T.F. Monty is a pseudonym.

More in this category: « First Date: Part 2 The Ice Is Broken The Third Date: to Meet The Family or Not? »
back to top